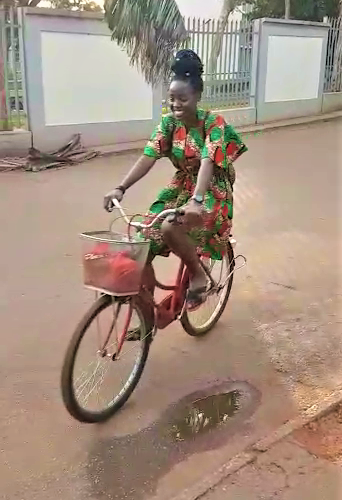 Do you ever question the existence of traditions and cultures and how they became the true norm amongst different societies?

Things like for a woman to be proposed to, the man has to kneel and on one knee?

Or a man was (or is still) considered prosperous to have as many women as he could and a woman, on the other hand considered immoral and promiscuous or further killed if found guilty?

Well for some reason, whatever the myth, value or practice, it seemed to favour the men either implicitly or openly.

In the early years, the currently trending equality was unheard of – in fact irreverent – since women were considered as the weaker sex.

The liberty that a woman has now to express herself or pursue her ambitions or even “shooting her shots”, was known to only be a man thing.

Community gatherings, who got to do what, who had the right to say what-

In some way or another, the men were considered more superior!

This though, doesn’t resonate with me given how few genes there are on the Y chromosome compared to the X chromosome🤷‍♀️, which women have in double.

You already know where this is headed – the feminism talk!

Anyways, back to history of inequality.

From the bible for example, if you have read it, you know of King Solomon and Mary Magdalene

If it wasn’t for Jesus, Mary Magdalene would be stoned to death for sleeping with more than I don’t remember how many men.

But you don’t hear anywhere – from the many versions of the bible – that someone attempted to stone King Solomon for sleeping with 1000 women, that is, 300 wives and 700 concubines – wow this guy!😅

Well you could argue he was a king

But there were others: Jacob the son of Isaac with two wives and two concubines, Elkanah with two, Esau, David, Benjamin – name it.

And not just Israelites or Jews, this was a common thing in different cultures all over the world, even in other aspects of society.

As generations shift, that is from early stone age to the now digital age, there have been tremendous shifts in how society views the capacities of a woman and the liberty they are entitled to, to showcase them

By efforts of women like Chimamanda Ngozi Adichie, Ruth Bader Ginsburg, Simone de Beauvoir  and the likes, the western world has striven to have equality enacted.

As much as this has been keenly promoted in African countries like Uganda, through advocating for girls to stay in school, equal employment opportunities among others, some changes regarding equality are either at a snail’s pace or just imprinted on DNA.

And for some reason, the reaction on seeing one riding – whether positive or negative – is like witnessing the moon shine bright at noon!

As a female cyclist, I have gone through all sorts of otherising every other day I ride.

It comes from all sides anywhere: boda-boda guys at their stages and those enroute; passengers seated in taxis and on boda-bodas; pedestrians walking in the same and opposite direction – everywhere

Somehow these people feel entitled to impulsively say or shout out anything that pops to them!

Some of it, I am impelled to think, “Whoahhhhhhhhh, the gutssssssss!🙄”

And for other instances, I am indifferent to whatever is thrown at me, like, “ Oh well, I didn’t see that coming – regardless – we (me,myself and I) ride!”

In this post below (which is a long read btw – headsup😁), I will be sharing comments I have received while on my voyages – from the most to least common phrase(s) – for being a female cyclist.

Okay seriously there is two wrongs with that, and around one word

Maybe I am one but I still think I’m eligible to be called a girl😅.

Anyhow, whether I am one or not yet one, how is it okay for kids to blurt out such?

I have seen kids stop playing and resort to staring at me, saying that exact line and additionally one of them, booking my bike to be theirs😄.

The latter reminds me of how I used to book trucks as my cars while I was with my peers – such is the power of being innocent and dreamy when young!

So for the kids that covet my bike, it’s totally understandable – I mean have you seen my bike?😎

Seriously though, I don’t hear kids get shocked seeing a man driving a car or riding a boda boda

What kind of environment are we letting innocent young blood live in?

It is from such prejudices that they, especially the girl child, convince themselves they can’t pursue STEM courses because well, the men do them, not women!

And you know these are young kids, the next generation of leaders being shocked to see a woman exercising her rights to be alive.

Like we are not entitled to the benefits and the whole nine yards attached to cycling?

No no no, UGANDA this is totally wrong!

Truth be told, this is one of the many lines I am never happy to hear.

This translates to Baby, help me with your bike so that I can ride for a short while

I get this every day, to and fro a designated destination

“Can you handle this one, it is the kind with no gears?”, me on a good day and I am pushing my bike on a hilly surface

And other times, especially if I just want to reach home to rest from a really long day, I am never in the mood to even pick my phone no matter how many times it rings

So definitely, those my fans are most likely to be speaking to a riding log

Though, lately I have been thinking about risking my bike

I want to give it to whoever asks just to laugh at the fact that they can’t reach the pedals because well, the seatpost of my bike is quite in the sky to cater for only my long legs.

Just like the English statement, the subsequent Luganda words which mean the same thing are actually uplifting remarks.

For some positive-reinforcement reason, I find myself with a grinning face, especially when such a line comes from a fellow woman.

You know that statement, “You are my ride or die”

It totally means something very different but somehow, it comes to me while climbing a hilly terrain, especially after a junction when the lights go green.

I either ride or die.

When the lights are on red, it is typical for motor cycles and bicycles to be at the front of the cues.

When the lights go green, on top of all the kinds of noises behind me , there is all kinds of vehicles – cars, motorcycles, bicycles – on my wheels.

That moment is an actual adrenaline-rush situation and feels more like the Olympics, when they call out, “…..On your mark..get set..goooo….”

So I endeavor to pedal hard because well, my bike is a gear less one and I love my life to lose it in a race with boda-boda guys

When other people spot me vigorously climbing the hill, in my understanding, they can’t help it but call me the best – which I am anyway😃

…..which translate to “(Baby)carry me /give me a ride on your bike “ and the last statement literally means “baby ride me on your bike”

These statements have different connotations.

I presume the first meaning is used because my bike has a pillion which I mostly use to carry merchandise and only once, attempted to carry a friend and for a short while.

It is usually said both in English and Luganda and I am generally smiley when someone says it.

In most cases, this comes with a joking tone.

If I know that someone, I similarly banter by asking them to jump on if they can.

For the latter meaning, the guys usually insist to ask me in a more vulgar tone followed by other figurative profane words.

Usually, this is always said by men that are either seated by the road side lacking what to do or boda-boda men redundantly seated on their boda-bodas

When one says it, it’s like a spark for his colleagues to utter all kinds of sexist comments only idle minds can imagine.

When I hear something like that, I am only reminded about how important it is to actually have constructive thoughts and the right company, lest other people suffer.

“Baby the goat is going…”

……is what that statement literally means.

Goat in this case is a metaphor for virginity used commonly in the central, western and eastern regions of Uganda

Whenever I get that, I wonder, “How is sitting on a miniature-raised seat while using my lower limbs to propel me forward using pedals on a bi-cycled device make me lose my virginity?🤔”

The guys that utter that radiate a loud-spoken impudent sort-of personality.

And as far as I can recall, it was guys that load merchandise on trucks, male passengers on boda-bodas and boda-boda riders that at that moment were riding recklessly – you can imagine!

It reminds me of some of the myths I was told while young.

That though, didn’t stop me from doing either of the two and well, I don’t remember losing my virginity while doing either.

Surprisingly though, for Azawi and Quinamino, I have got this from different locations and various times

Azawi is a Ugandan musical artist that is known for her unique vocals, hit song Quinamino and dreadlocks hairstyle.

Additional to my hair, I am called Rasta and in fact, more often than the above.

And for some reason I tend to be giggly when called any of that.

This translates to, “Sexy, I am going to marry you!”

I am already booked I guess.

I got this once from a boda boda man and I remember everyone in the vicinity laughing, including myself as I rode off

When he said it, I was heading home along a busy street in a village close by home often referred to as “trade centre” by locals.

I was so overwhelmed and ended up grinning the rest of my journey.

I got this once and it just cracked me up!

For crying out loud, my bike is super red and I don’t remember owning any yellow garment in my closet.

You would think someone would instead say “People Power” – which I have received on a few occasions by the way.

But for some reason, to them, I appeared like a roaring blade-slap sound from a helicopter

That statement – “bye Museveni……” – is said in unison and repetitively by kids in the central region while facing the sky when they see a helicopter.

To me, riding is one of the best decisions I have made for the last 25 years.

And to the society I live in, it is one of the most shocking thing to ever be witnessed.

All in all, WHETHER I am cheered, ridiculed or sexually harassed, it comes down to why I do it – the free transport, the exercise, beating traffic, the fresh air, the great feeling of freedom, the amazing feeling of being in control – and so much more.

With all this, it surely gets me back on the road the next day and all the other days – heading anywhere as fast as my legs can take me.

If you have any comments or questions about the things people say to me while I ride, put them in the comments section below – I am more than happy to respond to them😊.